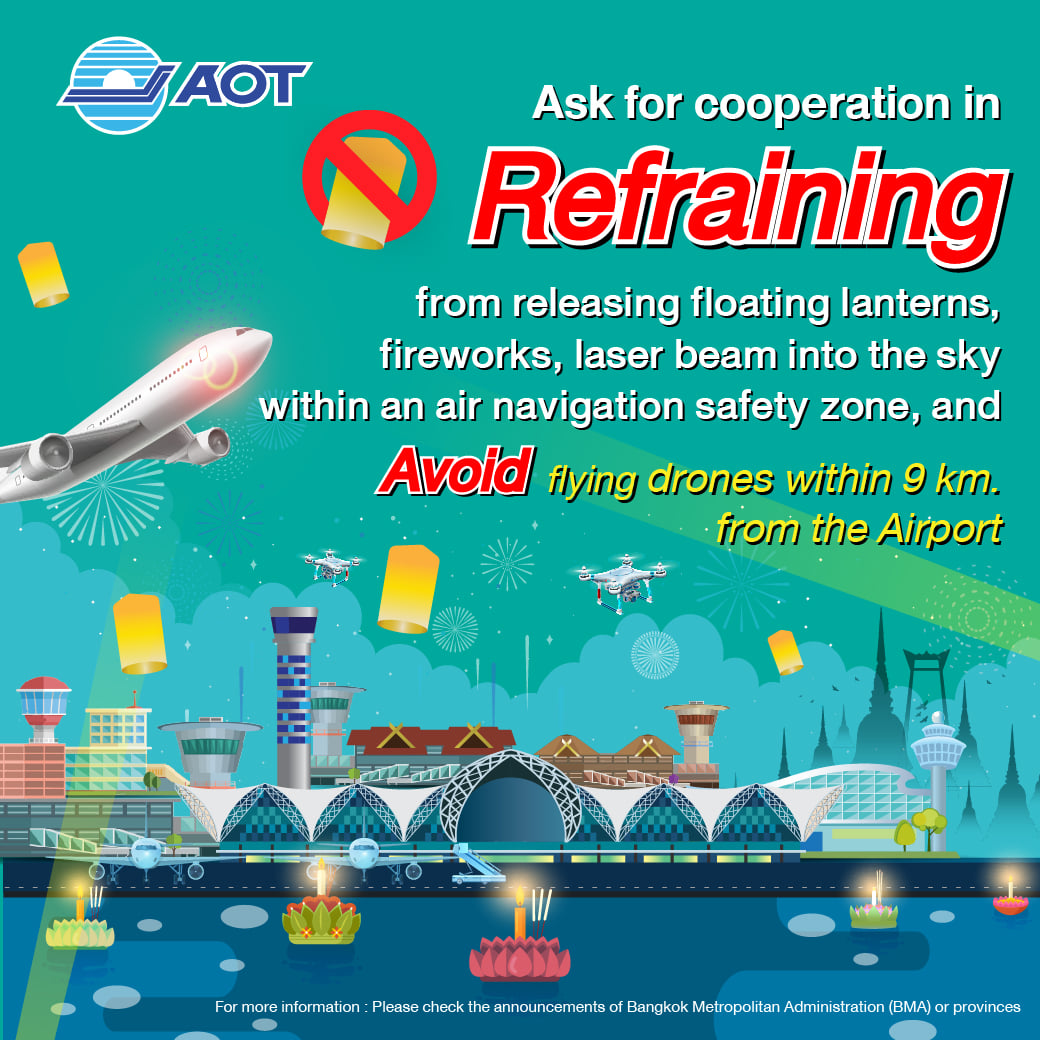 Airports of Thailand Public Company Limited (AOT) asks for cooperation in avoiding releasing floating lanterns, fireworks, laser beams and drones near surrounding areas of AOT’s 6 airports during the upcoming Loy Krathong Festival to prevent aircraft, passengers and other people from accidents that may happen.
This year Loy Krathong Festival will be held on 19th and 20th November 2021. In some areas, people usually launch floating lanterns during this festival since their belief of launching the floating lanterns will bring them good fortune. As an airport operator of 6 international airports, namely Suvarnabhumi Airport, Don Mueang International Airport, Chiang Mai International Airport, Mae Fah Luang-Chiang Rai International Airport, Phuket International Airport and Hat Yai International Airport, AOT asks cooperation from the neighboring areas in avoiding releasing floating lanterns, fireworks, balloons, laser beams and drones into the sky, especially within the air navigation safety zone (airfield and its surrounding areas), which may jeopardize aircraft and pilots’ visual range. This request is in accordance with the Thailand Air Navigation Act B.E.2497 (section 59/1 and 59/2) and the Announcement of the Civil Aviation Authority of Thailand (CAAT) on Organizing Activities within Air Navigation Safety Zone B.E.2563 that prohibits the releasing of floating lanterns, rockets, fireworks, laser beams and similar objects into the sky. To comply with the Announcement of CAAT on Rules to Apply for Permission and Conditions to Control and Launch Unmanned Aircraft in the Category of Remotely Piloted Aircraft within 9 km. (5 nautical miles) from Airport or Temporary Airfield B.E.2561, using a drone near the airport area must be permitted from an authorized person every time prior to being launched as well as being strictly followed by the established criteria.

For the release of floating lanterns or other flying objects outside the air navigation safety zone, it must ensure conformity with the announcements of Bangkok Metropolitan Administration (BMA) or provinces, which specify the launching zones, and determine to ask for permission from local district chiefs at least 7 days in advance. Additionally, some provinces in the northern parts of Thailand where floating lanterns are very popular such as Chiang Mai province, lighting and releasing flying lanterns within the air navigation safety zone and special surveillance area level 1 (Red Zone) are strictly banned in 6 districts namely (1) Mueang (all sub-districts) (2) Hang Dong (all sub-districts) (3) Saraphee (Khua Mung, Don Kaew, Tha Wang Tan, Nong Phueng and Sansai sub-districts) (4) Mae Rim (Don Kaew, Rim Tai, Mae Sa, Muang Kaew, Rim Nuea sub-districts) (5) Sansai (Nong Han sub-district) and (6) San Pa Tong (Tung Tom sub-districts). However, releasing floating lanterns outside air navigation safety zone in Chiang Mai is permitted from 19th to 20th November 2021 between 7:00 p.m. – 1:00 a.m. of each day which will be divided into small lanterns on November 19th, 2021 and big lanterns on November 20th, 2021. Permission from local district chiefs must be given 30 days in advance while Chiang Mai International Airport or local air traffic control center must be notified of the release of floating lanterns 14 days in advance. As a result, some airline operators adjust their flight schedules to avoid any effects caused by the floating objects during this traditional festival. Based on flight information as of 12th November 2021, there were 16 flights to be cancelled and the other 52 flights to be rescheduled, totally
68 flights.For the utmost safety of aircraft and passengers at our 6 airports during this festival, AOT; therefore, has launched a campaign for releasing floating lanterns under safety measurements to give appropriate guidelines and practices in releasing lanterns during the Loy Krathong Festival while AOT also provides photograph kiosks inside Terminal Buildings of its airports to take part in promoting this national tradition.